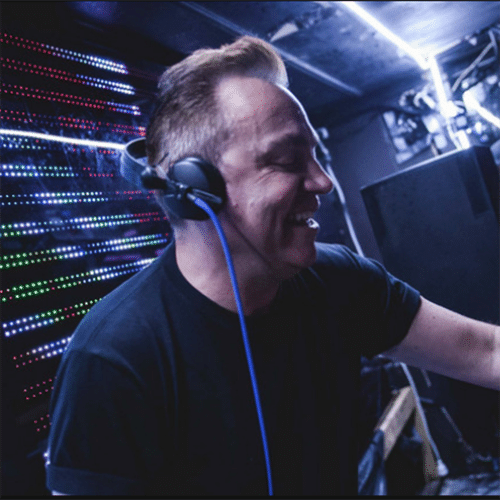 The man better known as Groove Terminator – or GT- was the first top-flight Australian DJ/Producer to firmly establish himself as a major international recording artist.

As a DJ, Recording Artist, Multi-Platinum Producer, Remixer, Music Supervisor, and as the creator of music for major corporate brands, campaigns, television shows and motion pictures, Simon Lewicki continues to create music that is influencing audiences and popular culture throughout the world. The man better known as Groove Terminator – or GT- was the first top-flight Australian DJ/Producer to firmly establish himself as a major international recording artist. In 2000 his Virgin/EMI Records debut top 40 selling album, ‘Road Kill’ & the critically acclaimed follow-up “Electrifyin’ Mojo”, both received widespread recognition by the mainstream Australian Recording Industry. These releases earned several ARIA nominations (the Australian equivalent to the U.S. GRAMMY Award) including for Best New Artist and Best Male Artist. Other recognitions include, six Australian Dance Music Awards; including for Best Producer; and several nominations for Best National DJ. Also in 2001, his single “Is It Love?” scored #1 on the Billboard Dance chart. He has produced, recorded & remixed many of Australia’s major recording artists. His credits include Multi-Platinum releases for Savage Garden, Gold certified releases for Grinspoon and Dead Or Alive as well as productions for platinum artists Groove Armada and Gorillaz. His diversified productions also included for contestants from Australia’s American Idol franchise and for Popstars. While maintaining his career as an active recording artist, producer and DJ, he has also composed and produced nominated TV & radio commercials for Coca Cola, the National Austereo Radio network, Nike, Vodafone, Virgin Mobile, Quiksilver, Sunsilk Shampoo and many others. His music has been licensed for television campaigns such as by ESPN, EA Sports, the NHL & Prudential Insurance. Licenses for television series include for “Malcolm In The Middle”, ”Queer As Folk” & ”Big Brother”. Original music for BBC TV series ”Aerosol Art” as well as producing & recording original title & theme music for Australia’s highest ever rating reality TV show “The Block”, which is due to premiere in the U.S. in 2007. His music has been utilized for many films and trailers via the major studios such as Universal, Buena Vista, and Paramount Pictures including the worldwide campaigns for “ Lara Croft-Tomb Raider 2”,“Danny Deckchair” and “The Cut” GT had several successes under the “Tonite only” guise, including, ‘Danger (the bomb)’ and ‘Where the partys at’. The duo also released a remix of the single “pictures” by sneaky sound system, which stayed at aria number one in the club charts for 16 weeks in 2006/07. ‘Tonite Only’ split in late 2006, with both GT and co-member Sam La More choosing to pursue solo projects. Currently GT is living in Los Angeles, CA, USA, where he is DJing and producing for the world’s top musical talents. He is heading back to Australia in June 2007 to tour the local clubs he used to frequent. He has performed in Singapore, Hong Kong, China, Japan, Austria, France, Germany, The UK & USA & of course throughout Australia & New Zealand.